The Palasota Drive Phase I Reconstruction Project is scheduled to begin the week of Jan. 18, 2021. Bridge reconstruction at Cottonwood Branch (West of Bridge Meadow) and at Tributary 5 (West of Groesbeck) will prevent East – West through traffic between West 28th Street and Beck; and between Beck and Groesbeck.

Through their investment in the old Bowie School on 26th Street, GVBM, LLC showed that with a little bit of love and patience, downtown revitalization is alive and well in Bryan. That’s why they were honored with the Mayor’s Downtown Impact Award this year.

On Monday, Jan. 18, 2021, the City of Bryan Municipal Office building and all other City administrative offices will be closed in observance of the Martin Luther King, Jr. holiday and will resume normal operating hours on Tuesday, Jan. 19, 2020.

The City of Bryan is exploring the possibility of offering broadband internet access, and we need the public’s help – both residents and businesses – to determine the feasibility and cost-effectiveness of doing so.

The City of Bryan’s Public Works and Fire Departments have a few reminders when it comes to your live Christmas trees.

After 76% of voters approved the proposition that allows (but does not require) the City of Bryan to offer broadband internet service, Bryan residents may be wondering “what’s next?” The answer is research.

The City of Bryan now owns the historic Queen Theatre, ensuring it will continue its legacy as an icon in the heart of Historic Downtown Bryan. The Bryan City Council unanimously approved the conveyance of the building from the Downtown Bryan Association (DBA) at the Council’s Dec. 8, 2020 meeting.

With 2020 behind us, City of Bryan staff are preparing to embark on a big year for big projects in Bryan. From storm water to road repairs to sidewalks, residents will have the opportunity to give input on some projects and see progress made on others. Here are 11 public improvement projects in Bryan to keep your eye on this year.

A list and map of all of the city’s Capital Improvement Projects is available at https://maps.bryantx.gov/cip/

One of the biggest projects residents will be able to give input on in 2021 is the Texas Avenue improvement project, which is a partnership between the Texas Department of Transportation, the Metropolitan Planning Organization and the City of Bryan.

The project calls for improvements to more than 5 miles of roadway on Texas Avenue from University Drive north to Old Hearne Road, just past State Highway 21. Improvements include raised medians, sidewalks, burying power lines and a shared-use path.

City staff began initial design work in early 2020 and engaged businesses and residents along the first phase of Texas Avenue from Old Hearne to 15th Street. In 2021, businesses and residents along the rest of the corridor from 15th to University Drive will have the opportunity to give input and talk with project team members during online public meetings in the spring of this year.  Phase 1 will start by end of 2021 and take approximately one year to complete, and the remainder of Texas Avenue is scheduled to be under construction from the fall of 2022 through the fall 2024.

The designs are being finalized on storm water drainage improvements for the neighborhood surrounding Bristol and Esther streets, just southwest of East 29th Street and East Villa Maria Road. These improvements will help reduce flooding in the area and will include some road reconstruction on Bristol Street. The city held an online public meeting in 2020. Construction will begin in the fall of this year and will be complete by beginning of 2023.

Significant improvements are coming to Old Hearne Road from Sims Street and State Highway 21 north to Wilhelm Drive. The project calls for improvements to the storm drains in the area, widening the road to three lanes, installing curb and gutters and building sidewalks. 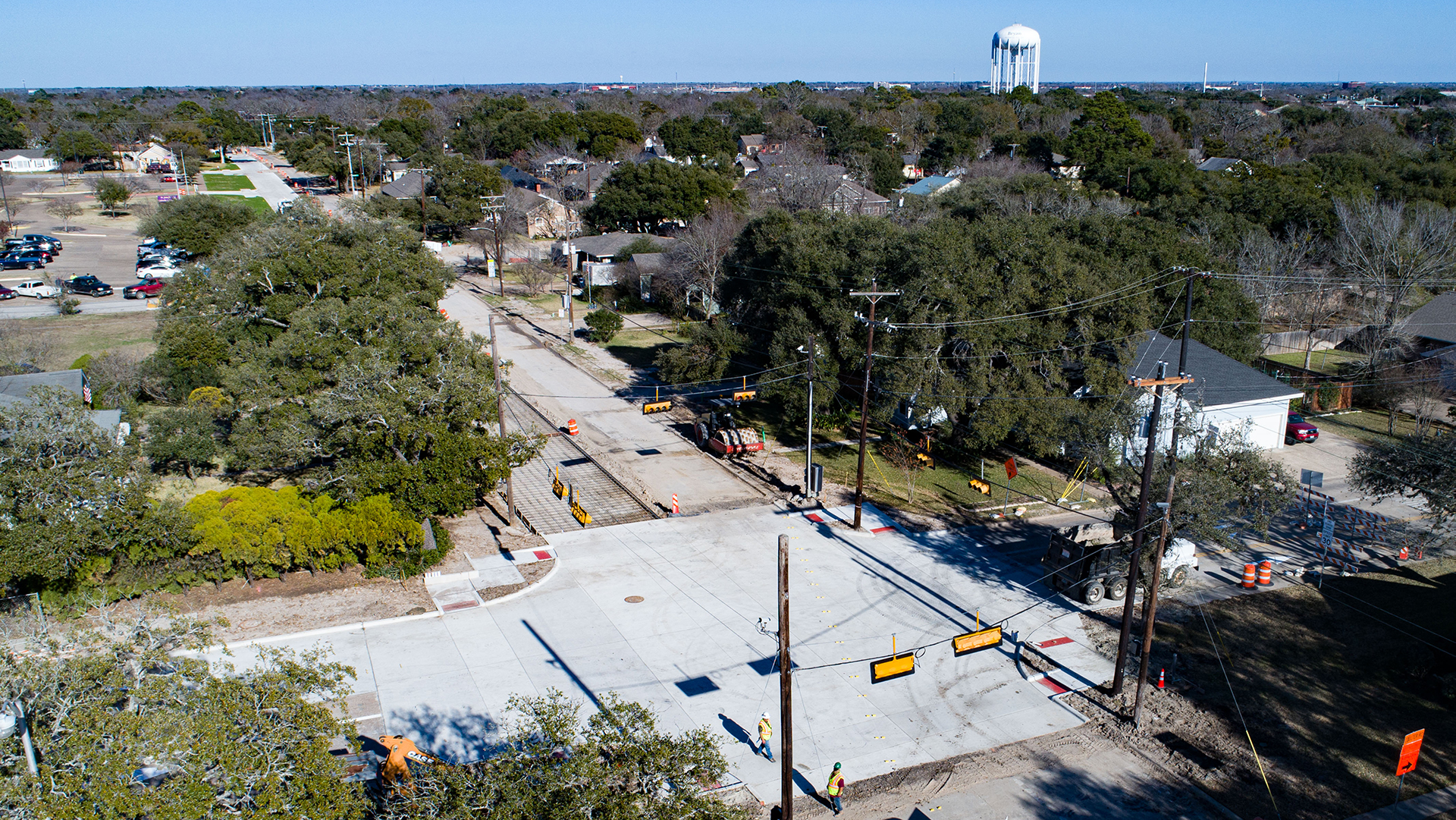 Work continues to make it easier to walk and ride a bicycle down Coulter Drive. Improvements include sidewalks and a bicycle lane from South College Avenue to William Joel Bryan Avenue, and road reconstruction from 29th Street to South College Avenue. Road construction is completed in the 29th Street intersection, and the 32nd/Carter Creek intersection with the overall road and utility project at 20% completion.  The Texas Department of Transportation’s contractor will begin sidewalk construction in early 2021 as part of the grant that is paying for the sidewalks along the corridor.  This project is expected to be complete by fall of 2021.

City staff are working to alleviate localized drainage issues in the Wayside Drive and Carter Creek Parkway area. Consultants are being selected now, and they will begin designing sewer enlargements along the area in early 2021. Construction is estimated to begin as early as spring 2022 and be complete as early as spring 2023. 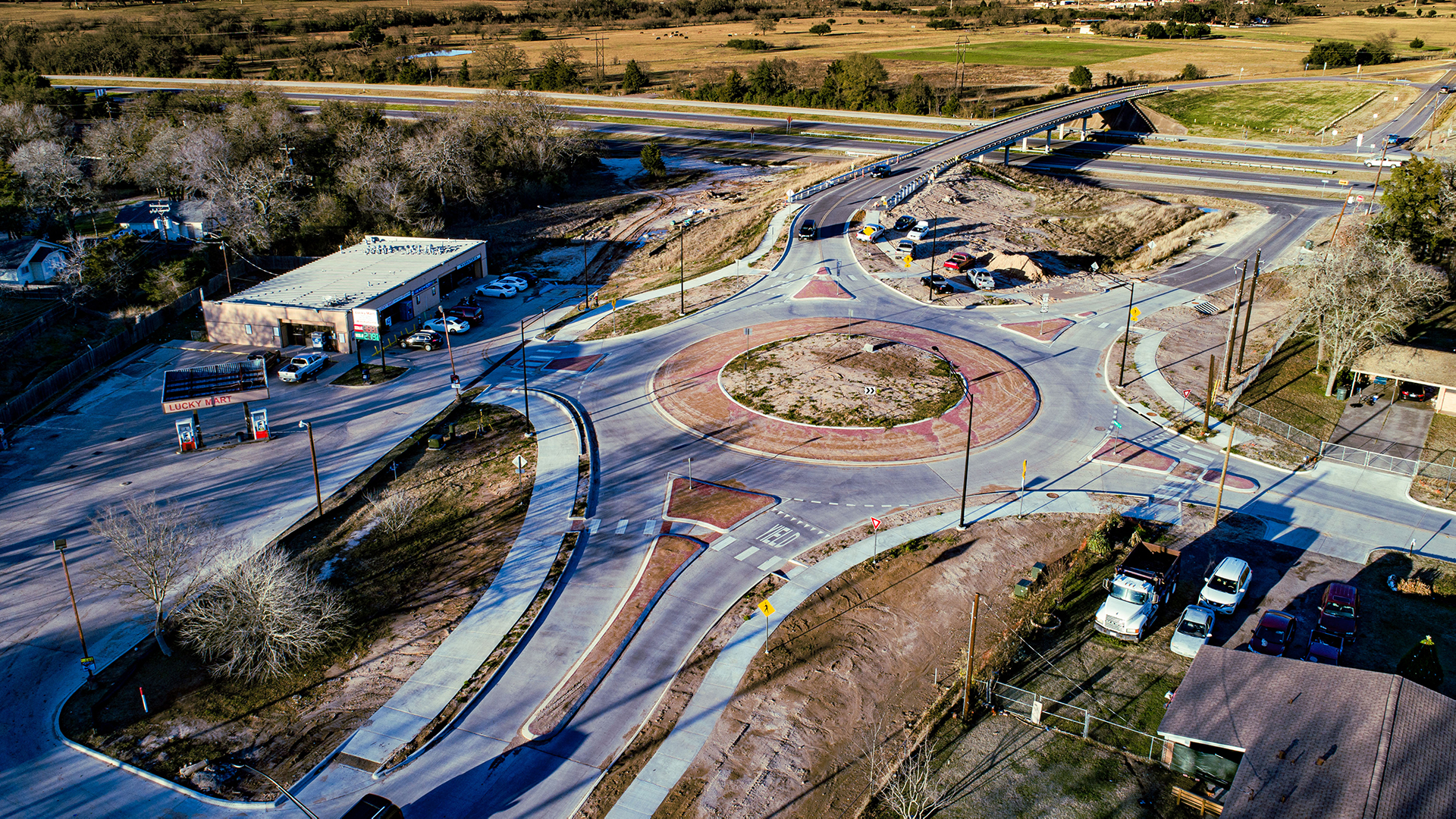 Construction is underway on major improvements to Woodville Road in north Bryan from the bridge at State Highway 6 to Old Hearne Road. Plans call for:

The roundabout at the State Highway 6 bridge has been constructed and the contractor is working on the other roundabout at Old Hearne Road with the overall project at 70% completion.  In the future, improvements are planned to continue west to North Texas Avenue. Work is anticipated to be completed in spring 2021.

For this project, the city will replace culverts in the Still Creek area near Old Hearne Road with larger ones to improve drainage capacity. Other improvements include raising the roadway in certain areas and extending Missouri Avenue north past Wilkes Street. Construction was delayed due to easement acquisition and is scheduled to begin in early 2021 and completed by the end of the year.

This project is planned for Palasota from Groesbeck Street to just north of Anson Jones Elementary School. Once complete, the roadway will have curbs and gutters, sidewalks, two roundabouts and other drainage improvements. Future plans call for further improvements to extend to where Palasota Drive and 28th Street intersect. The construction contract has been awarded, and construction should begin within the next several weeks. The project should be complete by early 2022. 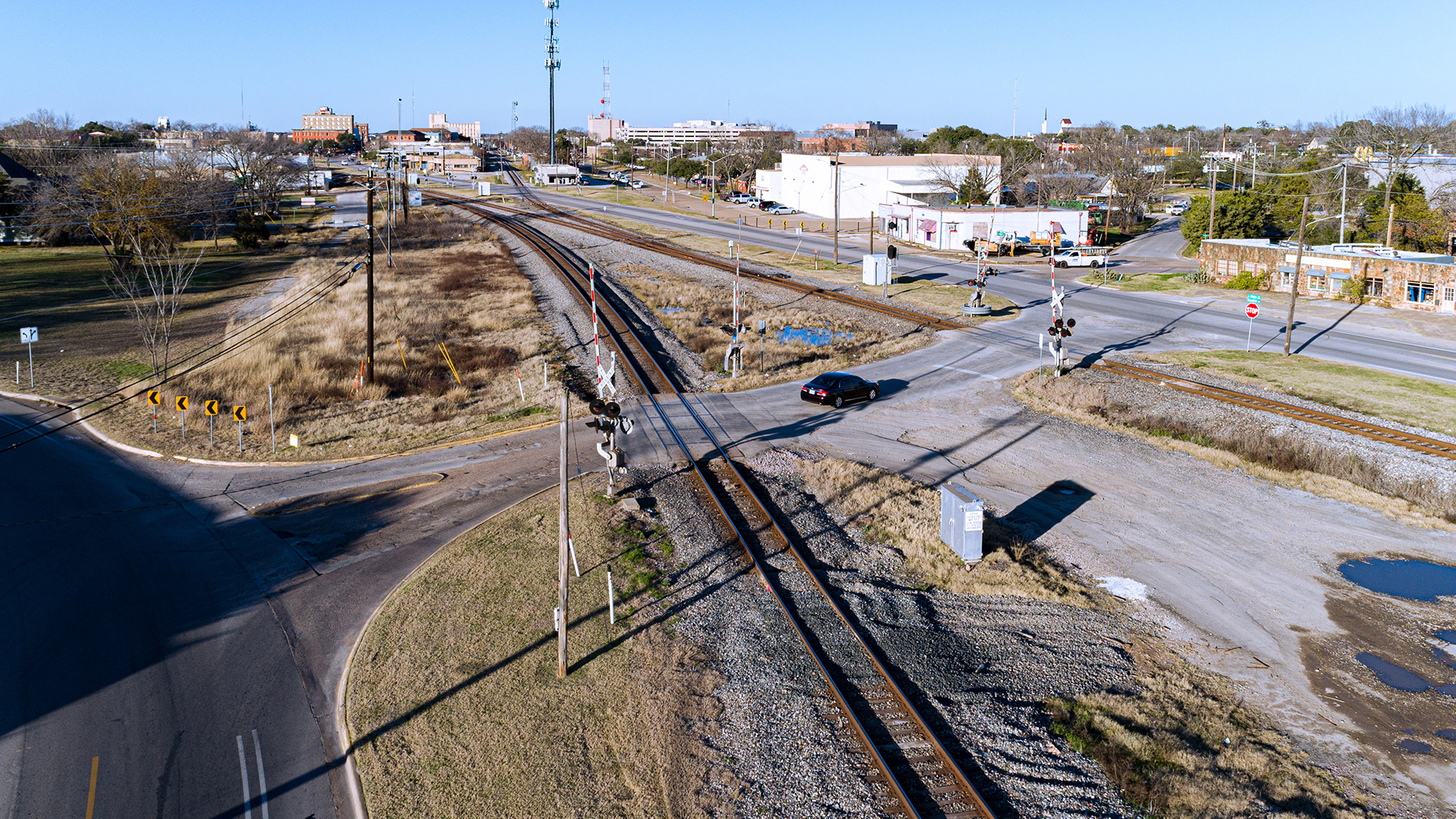 Residents and visitors in Downtown will hear a few less trains in the next few years. Infrastructure improvements will allow the Downtown area to be turned into a Quiet Zone – meaning fewer trains will be blowing their horns at each railroad crossing.

Twenty-two crossings in Downtown will see changes that include raised medians, curbs on the crossing approaches, crossing gates and rebuilt traffic signals. These improvements were scheduled to occur in spring and summer of 2020; however, the Federal Rail Administration (FRA) has delayed issuing their approval of the planned improvements. Upon receipt of that FRA approval, the first construction contract for median improvements will begin along with the Groesbeck Drive crossing work. The schedule is dependent on receiving approval from the FRA.

Once construction is complete, additional inspections and work will need to be complete by the railroad, so the earliest the Quiet Zone will go into effect (assuming approval from the FRA in near future) will be late 2022.

Residents in the Oaks subdivision will see storm sewer and street improvements coming in the future. These improvements will expand the currently undersized drainage system in the subdivision. Design efforts will take place in 2021 and construction is expected to begin in 2022 with completion by 2023. 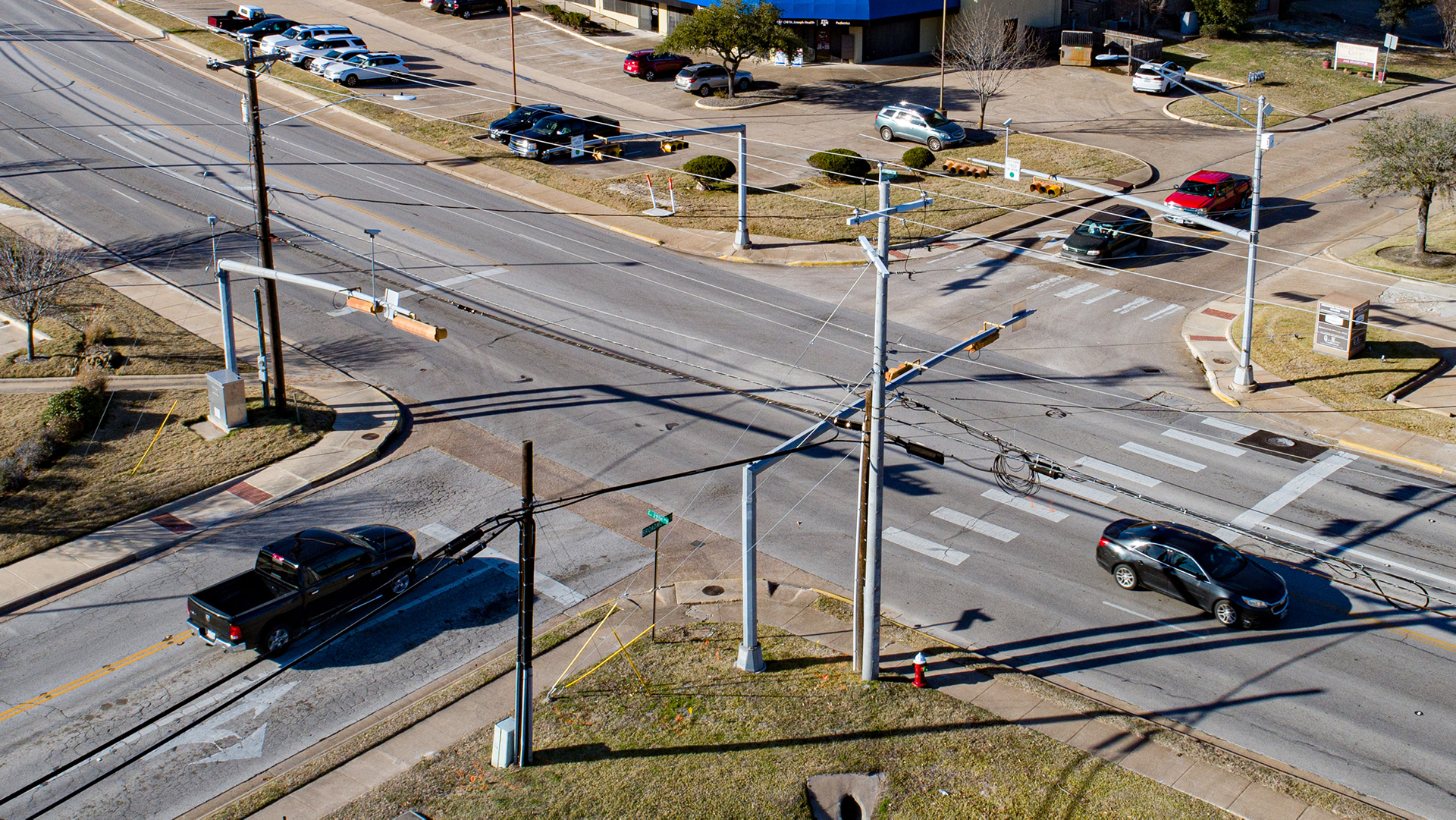 Traffic signals at two intersections along 29th Street will be replaced this year. The poles, mast arms, signals, pedestrian crossing lights, controllers and communication devices will be completely replaced. The intersections at 29th Street and Broadmoor Drive and 29th and Carter Creek Parkway will receive the new traffic signals, with construction beginning as early as this summer and completed by the end of the year.

The current signals at these intersections are past their life expectance, and the new signals will reduce maintenance costs, improve traffic timings, increase efficiency and add pedestrian crossing buttons.

Two additional traffic signals at Briarcrest Drive and Villa Maria Road, and Briarcrest and Broadmoor Drive are scheduled to be replaced in 2022.