The Board of Directors of Bryan Texas Utilities (BTU) voted to extend a rate-reduction measure, which was originally set to expire at the end of May. The reduction of the power supply adjustment by one-half will result in an approximate 15% reduction in electric costs for customers.

One of the most unique aspects of the recently adopted Midtown Area Plan – Pattern Zoning – was given a Merit Award in the Emerging Projects category from the Center for New Urbanism (CNU) as part of the organization’s 2020 Charter Awards.

Several new assistance programs will soon be available through the City of Bryan’s Community Development Department to help individuals and businesses with COVID-19 relief.

The Phillips Event Center is now owned by the City of Bryan, after the Bryan City Council accepted the property as a donation from Wallace Phillips of the 1980 Phillips Group, LCC, at their May 18, 2020 meeting.

Making children count in the 2020 Census

Children under age 5 are one of the largest groups of undercounted people in the United States. Population counts from the Census are used to fund programs that directly affect children in our community, and being undercounted means being underfunded.

On Monday, May 25, 2020, the City of Bryan Municipal Office Building and all other city administrative offices will be closed in observance of Memorial Day. City offices will resume normal operating hours on Tuesday, May 26, 2020.

As a result of more than 18 months of community outreach, economic research, stakeholder feedback sessions, and problem solving, the Bryan City Council unanimously approved adopting the Midtown Area Plan at its May 12, 2020 meeting.

How has COVID-19 Impacted Your Small Business? Take Our Survey and Let Us Know

The City of Bryan is collecting information regarding economic impacts to our small businesses (under 500 employees) as a result of the coronavirus. Your responses are very important. They will be used to help guide city in preparation of a small business recovery plan.

Motorists may want to find an alternate route around West Villa Maria Road beginning this week, as construction crews will have inside lanes closed on various sections of the road. 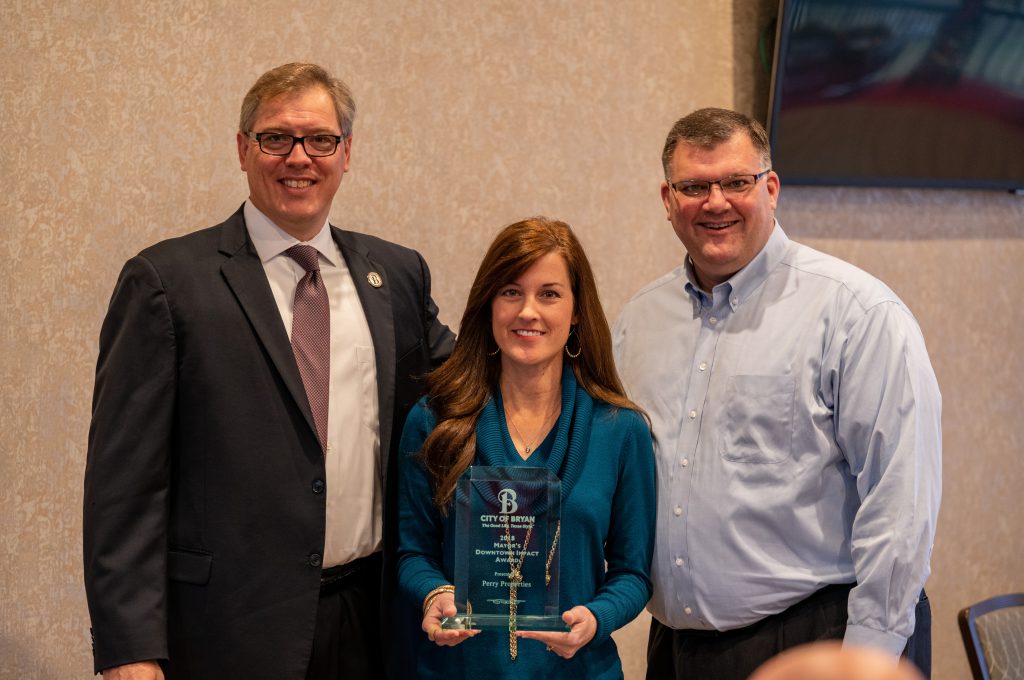 The Mayor’s Downtown Impact Award, created in 2000, celebrates progress in Bryan’s oldest business district while recognizing those who go above and beyond to contribute to this progress. Every year, there are organizations and individuals whose positive impact on revitalization efforts in Historic Downtown Bryan is simply extraordinary.

This year’s recipients are Brent and Krissie Hairston, owners of Perry Properties. In 1997, The Hairstons bought their first business and building in historic Downtown Bryan, Discount Carpet. At the same time, they invested in a second building at 208 North Main. Originally constructed in the 1920s, this building is now home to the fully renovated residential space known as Perry Lofts offering a variety of one- and two-bedroom floor plans. Prior to the development of Perry Lofts, the couple sold Discount Carpet and opened Texas Furniture Company, operating the business from 2001 to 2008.

As owners and managers of Perry Properties, the Hairstons have overseen the renovation of three significant buildings in Downtown Bryan as well as the recent construction of a fourth building, Perry Place. This 30,000 square-foot building is the largest new structure built in Downtown Bryan in almost 50 years and is located on the north corner of East 23rd Street andNorth Main.

“Downtown Bryan is thriving because of the individuals that have invested their time and talents into the Cultural District,” said Mayor Andrew Nelson. “These efforts continue to be supported by the City through partnerships to promote the vitality of Downtown and the unique variety of amenities it has to offer residents and visitors alike.”

This annual award serves as a way to recognize those who continue to invest their time, effort, and resources into making Bryan an even better place to visit and to call home.