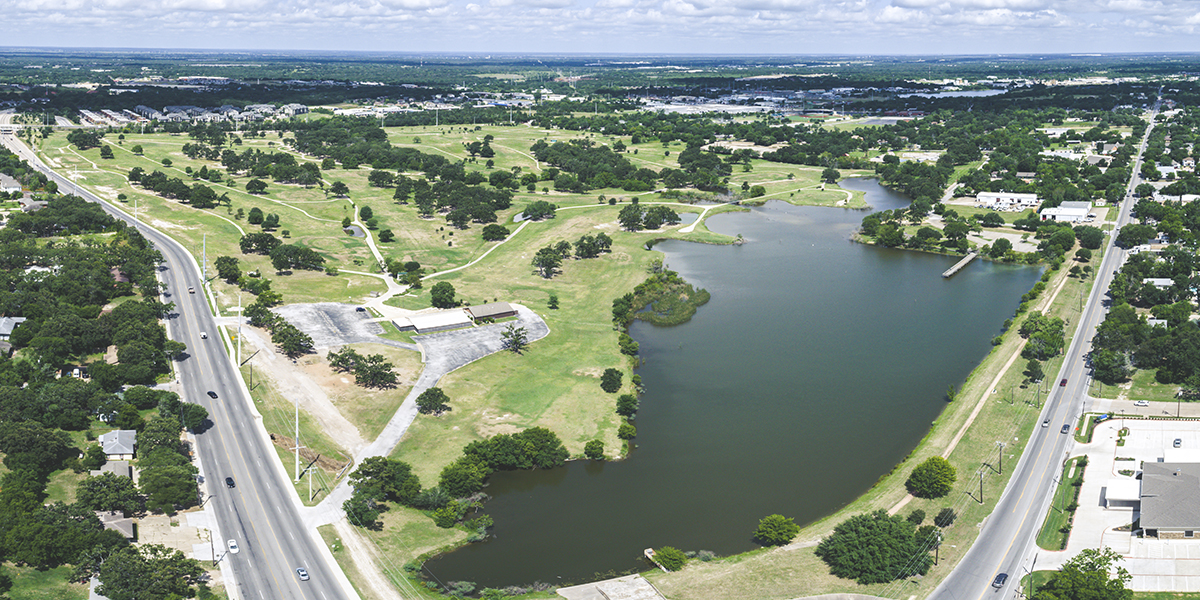 As work begins on Travis Bryan Midtown Park, members of the public will start to see significant activity throughout the park over the next few weeks. The work will begin the long process to transform the 148-acre park into a premier multi-use recreation and sports destination right in the heart of Bryan.

Periodic updates about the project as it progresses will be available on the city’s website, bryantx.gov/midtownpark.

The first piece of the Midtown Park project – a turn lane that leads into a new park roadway from Villa Maria Road – has been completed. Construction is underway to complete this roadway extension that will eventually connect Villa Maria Road and Bomber Drive, and it is estimated to be complete in July 2020, weather permitting.

Work will begin soon to rehabilitate the lake on the east side of the park. This work includes draining the lake and relocating fish to a different location within the same watershed, and building a bypass channel to allow the upstream water to flow around the lake prior to excavation. Once permit approval is obtained from the U.S. Army Corps of Engineers for the grading work in the lake (expected in summer 2020), work will begin on removing the excess sediment in the lake to deepen and widen it to its new limits.  Later in 2020, after the excavation work is complete, the lake will be partially filled to start re-establishment of the aquatic life.  As construction around the ultimate lake perimeter is completed in late 2021 or early 2022, the water surface in the lake will be increased to its full limits.

The park will be closed to the public beginning Monday, March 30, 2020, so heavy construction equipment can safely operate throughout the park. A chain-link fence will be erected around the perimeter of the park and barricades will be placed at the entrances of the parking lots at both Travis Bryan Midtown Park and Astin Recreation Area beginning March 30, 2020. The fencing should be in place by April 3, 2020.

Travis Bryan Midtown Park and Astin Recreation Area will remain closed through the duration of construction work at the park, which is estimated to be completed by the end of 2021, however sections of the park may open sooner as work is completed.

Williamson Park should remain open during this work.

The city has contracted with SOLitude Lake Management, which specializes in lake management, to relocate the larger fish within the same watershed. Fish relocation will begin on March 30, 2020, and the lake will be drained as early as April 6, 2020.

The city is following guidance from the Texas Wildlife & Parks Department (TWPD) in regards to the turtles that currently live around the pond.

“The best thing for the turtles’ health and safety is to let them relocate themselves,” said Niki Harbison, a Natural Resource Specialist in the Inland Fisheries Division of TWPD.

Instead of manually relocating the turtles, the city will construct fencing around the perimeter of the park to assist in directing them away from major roadways. It is recommended that the public not help the turtles relocate, but if they have to come in contact with turtles, they should wear gloves and wash their hands after handling to protect against salmonella.

Once the lake is drained, it will take up to three months for it to dry out before additional work can occur. For part of this time, residents in the surrounding area will likely notice a smell emanating from the lake – this is normal and is due to the sulfur and methane buildup that is present in the organic material remaining at the bottom of the lake.