City of Bryan a champion of National Cybersecurity Awareness Month

The City of Bryan is excited to announce its fifth year as a Champion of National Cybersecurity Awareness Month (NCSAM). We continue to be committed to cybersecurity, online safety and privacy. This year, as an effort to promote and raise awareness, we will have weekly fact-based posts highlighting importance of online safety, both at work and at home.

Get the information you need, whenever you need it, with the new official City of Bryan Mobile App.

Acre honored with statewide IT award

The City of Bryan’s Chief Information Officer, Bernie Acre, was recently honored by the Texas Association of Governmental Informational Technology Managers (TAGITM) for his long-time dedication to the organization and the IT profession.

Bryan residents may see contract workers in neighborhoods over the next several months as part of the City of Bryan’s Sanitary Sewer Overflow Initiative agreement with the Texas Commission on Environmental Quality.

Woodville Road will be closed between Woody Lane and Old Hearne Road from Friday, Sept. 11, 2020 until further notice as part of the Woodville Road Sewer Line Improvements Project.

Five reasons to sign up for a library card

September is the American Library Association’s Library Card Sign-Up Month, so now is the perfect time to get your own library card. Here are five reasons why.

The truth about pattern zoning

On Aug. 6, 2020 the Planning and Zoning Commission recommended approval of the Midtown Pattern Overlay Districts, specifying that pattern zoning be applied to properties in Areas 1-4 of Midtown, as identified in the recently approved Midtown Area Plan.

On Monday, Sept. 7, 2020, the City of Bryan Municipal Office building and all other city administrative offices will be closed in observance of the Labor Day holiday and will resume normal operating hours on Tuesday, Sept. 8, 2020 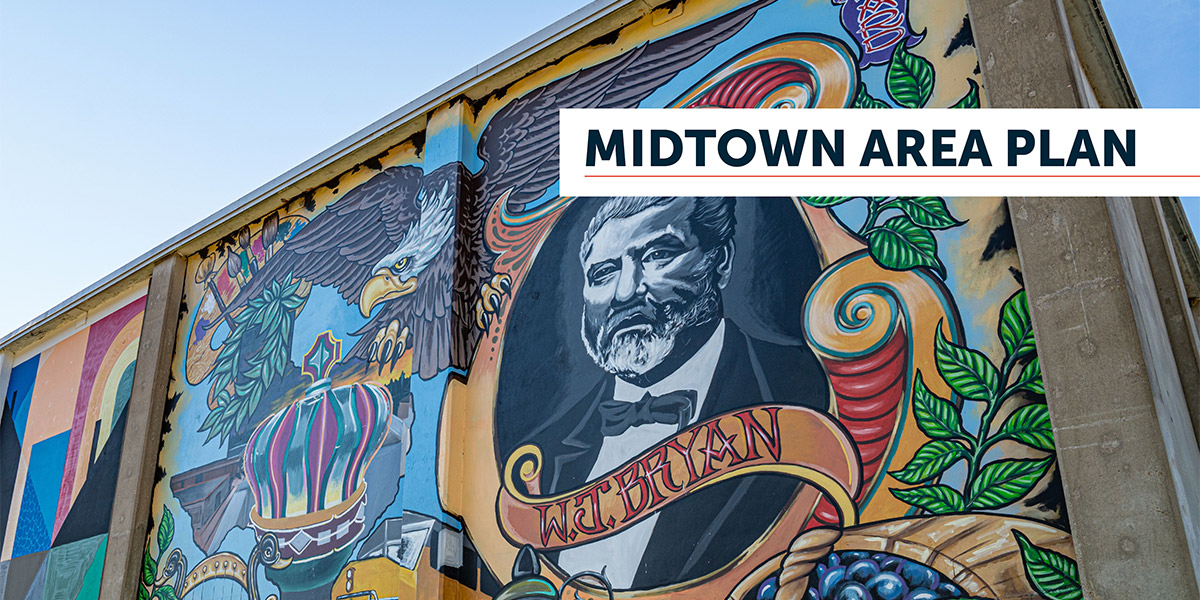 As a result of more than 18 months of community outreach, economic research, stakeholder feedback sessions, and problem solving, the Bryan City Council approved adopting the Midtown Area Plan at its May 12, 2020 meeting.

The plan, which is available at bryantx.gov/midtown, recommends two broad strategies to guide development in Bryan’s Midtown area: investment in the South College Avenue corridor and using an incremental approach to infill development of adjacent streets and properties.

The plan calls for coordinated public and private investment at five “catalytic” sites to build upon the success of the renovations to College Main Street and South College Avenue. These catalytic project designs are examples to start the conversation of what could be built on each site.  The intent is to stitch the entire length of the corridor together and to stimulate and support new development within Midtown.

Midtown is subject to substantial housing demand from students, young professionals and retirees. When that existing demand is bolstered by planned public investments such as the Travis Bryan Midtown Park and the catalytic projects, the city will need a more efficient and accessible development process.

While the plan itself, does not adopt any zoning changes, it does detail a novel technique — pattern zoning — that creates an opt-in expedited permitting program that uses new site design guidelines, licensed architecture and pre-approved plans. It also recommends several changes to current codes and processes and new rules allowing cottage courtyards on large lots, accessory dwelling units in backyards and modest text amendments to existing policies and procedures.

“Midtown is a prime area for growth and redevelopment in the near future, and we are pleased that we were able to listen to the residents and incorporate their ideas about how they would like to see it develop,” said Bryan Mayor Andrew Nelson.

The Midtown Area Plan keeps recommendations as voluntary as possible. All aspects of the plan are either fully voluntary or will not be triggered until the property is developed or redeveloped. Property owners can continue to use their property as-is, as long as they are following existing legal uses.

Now that the Midtown Area Plan has been approved, there are several proposed zoning changes needed to fully implement it. These zoning changes must first be considered by the Planning & Zoning Commission and City Council, which is expected to occur in late summer of this year. All pending dates for adoption will be posted on the Midtown website at bryantx.gov/midtown.

Anyone with questions about the Midtown Area Plan or proposed zoning changes should contact Project Planner Lindsay Hackett, lhackett@bryantx.gov.