The City of Bryan was recently named a 2020 Tree City USA by the Arbor Day Foundation in honor of its commitment to effective urban forest management. This is the 32nd year Bryan has received this honor.

Spend your summer having fun in the sun and hanging out with friends: Become a City of Bryan Lifeguard or Summer Camp Counselor! Bryan Parks & Recreation is looking to fill these positions for summer 2021.

Explore the great outdoors in Bryan

Spring has arrived in Bryan, and that means it’s the perfect time to get out and take advantage of all the outdoor amenities Bryan has to offer!

The City of Bryan Municipal Office Building and all other city administrative offices will be closed on Friday, April 2, 2021, in observance of the Good Friday holiday. They will resume normal operating hours on Monday, April 5, 2021.

This year marks the 150th anniversary of the City of Bryan’s official incorporation on Nov. 29, 1871. That’s 150 years of history to celebrate, and we are taking the opportunity to tell the stories of how Bryan has grown – through the people, places and things that shaped the community.

Plan your staycation in Bryan

Sure, you can go to the beach. Or head to one of the big cities. But those require hours in the car and spending tons of money on hotels and meals out. Why not save both time and money and plan a staycation this Spring Break right here in Bryan!

Richard Giusti has been named the next Fire Chief for the City of Bryan Fire Department.

Carson Street will be closed between Fountain Avenue and the railroad tracks from 8:30 a.m. Tuesday, March 9 and 9 a.m. Friday, March 12 for road concrete repair. 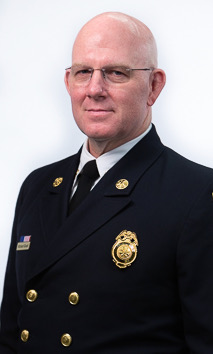 Richard Giusti has been named the next Fire Chief for the City of Bryan Fire Department.

The city conducted a nationwide search and received 44 qualified applications. Each applicant was vetted by a team of representatives from the Fire Department, Police Department, and other city departments. Eight finalists were interviewed, and Giusti was unanimously chosen to succeed retired Fire Chief Randy McGregor. He is expected to begin his position with the Bryan Fire Department in early April.

“Over the last few months, learning about the City of Bryan and its Fire Department has shown me what a tremendous community and organization I am joining. It is very apparent both the City Leadership and the Fire Department have a strong culture that focuses on the safety and service to the citizens we serve,” Giusti said. “It is a distinct honor to be selected as the Fire Chief for the City of Bryan and to represent such an excellent organization. I look forward to working hard to keep our citizens and firefighters safe while becoming part of this remarkable culture and living ’The Good Life, Texas Style’.”

Giusti comes to Bryan from the San Antonio Fire Department, where he currently serves as the Assistant Fire Chief and supervises 400 personnel, is involved in planning, policy, program development, performance evaluation, reporting, and training. He is a former Master Sergeant in the United States Air Force and has served as an instructor at Louisiana State University’s National Center for Biological Training and San Antonio College.

He holds a Master of Arts degree in Homeland Security from the Naval Postgraduate School Center for Homeland Defense and Security, a Bachelor of Arts degree in Disaster and Emergency Management from American Military University, and two Associate of Applied Science degrees in Fire Science and Instructor of Technology and Military Science from the Community College of the Air Force.

“We were extremely pleased with the number and quality of candidates who are interested in becoming Bryan’s next Fire Chief,” said City Manager Kean Register. “Ultimately, Chief Giusti was chosen because he is a dedicated professional with a safety-focused approach and broad experience leading firefighting operations and administrative initiatives. His experience training and leading a team, building relationships, and working collaboratively will be assets as he continues the tradition of excellence within the Bryan Fire Department.”

The Bryan Fire Department is a full-service department that provides fire and emergency medical services, fire prevention, training, inspection, and emergency management. The department staffs five stations throughout 54 square miles of the community and boasts a Class 1 ISO rating and EMS accreditation through the Commission on Accreditation of Ambulance Services.