4 things to LOVE about Bryan

There’s this unexplainable thing that makes Bryan special. It’s how friendly everyone is, their pride in the community. And, as we welcome hundreds of new residents each year, there becomes more and more to love about the city.

The City of Bryan has signed an agreement to bring BigShots Aggieland, a new family golf entertainment option, to Travis Bryan Midtown Park. The facility will break ground in April 2020 and is scheduled to open in spring 2021.

City of Bryan Parks & Recreation will conduct quarterly clean-ups at the Bryan City Cemetery to ensure a respectful appearance and to allow for ongoing maintenance at the cemetery.

West 17th Street from Harlem Lane to Columbus Avenue will be closed from Monday, Feb. 3 through the end of July, 2020 as part of a capital improvement project to improve stormwater drainage in the area.

Beatrice Saba, a career librarian, has been hired as the new Director of the Bryan + College Station Public Library System and will begin her position on March 2.

The Bryan Drive-In Recycling Center at 2202 Briarcrest Drive will be permanently closing on Feb. 16, 2020 to allow for redevelopment of the Walmart shopping center.

Over the next few months, community members have the opportunity to help identify the types of services needed in Bryan through the 5-Year Consolidated Plan Community Needs Assessment for the city’s Community Development Block Grant (CDBG) and Home Investment Partnership (HOME) programs.

There’s no question – Bryan is growing. In 2019, the City of Bryan issued 594 permits for single-family homes, setting a new record for the community and continuing a steady trend of single-family home building in Bryan.

Currently, there are 13 new subdivisions or new subdivision phases in development, accounting for more than 1,500 lots. Both the east and west sides of Bryan are growing in subdivisions such as Oakmont, Edgewater, Austin’s Colony, Greenbriar, and soon, Pleasant Hill. 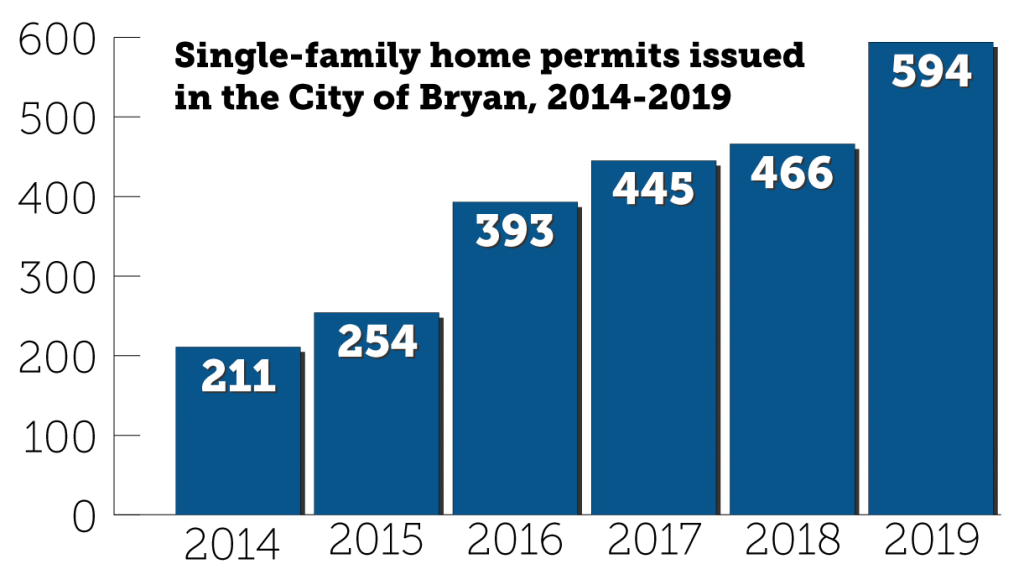 Why is Bryan growing so quickly?

City staff say the significant increase in construction is due to multiple factors that have made Bryan attractive for developers.

Developable land close to the core of Bryan-College Station is ample and available. Land in Bryan also tends to be less expensive than in other areas of Brazos County.

In 2013, the City of Bryan implemented its Homebuilder’s Incentive Program, which encouraged construction of residential homes that are 2,000 to 3,000 square feet of heated and cooled area. This program waives building permit fees, provides no-cost utility tap fees in new subdivisions and gives a rebate to builders who display their work during the BCS Parade of Homes.

About two years ago, the city also required that new development that would like to use city utility services, such as sewer and water, must voluntarily be annexed into the Bryan city limits.

How does this growth benefit the community?

The City of Bryan often receives requests for new retail and restaurant offerings – and you may have heard the adage “rooftops bring retail.” Retailers and restaurants prefer to locate in areas where they are geographically close to large numbers of residents. So, when large swaths of new homes are built in Bryan, it makes the city much more attractive to potential businesses looking to locate in Aggieland.

Bryan’s Planning & Development staff have planned for growth like this for several years through the city’s Comprehensive Plan and Future Land Use plans. Due to its location in the Texas Triangle, warm climate, low cost of living and proximity to Texas A&M University, Bryan is a highly sought after place to live, especially among former A&M students and retirees.