Every week, officers in the Bryan Police Department meet to talk about trends they see in the community. They compare what crimes have been reported with previous weeks and strategize how best to combat issues and track their effectiveness. BPD has been doing this process – using a program called CompStat – since 2010, and the results speak for themselves. 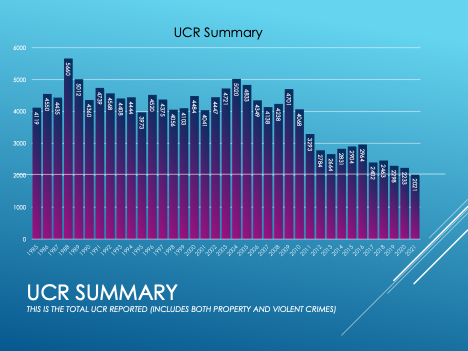 The number of crimes reported in Bryan (including both property and violent crimes) has been reduced from 4,701 in 2009 to 2,021 in 2021 – a 57 percent decrease. In that same time period, Bryan gained nearly 10,000 residents, so the overall crime rate is also significantly lower. In fact, the data shows that Bryan is the safest it has been since BPD began tracking and reporting Uniform Crime Reporting to the State of Texas and FBI data in 1985.

Each year, BPD officers respond to more than 60,000 911 calls requesting police services. They conduct traffic enforcement to proactively keep streets safe, and they patrol throughout the community to prevent criminal activity. In April 2021, BPD formed the Mental Health Unit, which is comprised of three officers and a sergeant who are specifically trained to work with individuals in mental crisis. Though it’s a new unit, the feedback from the community has already been extremely positive.

Bryan’s Neighborhood Enforcement Team (NET) actively works on problem-solving within neighborhoods. The NET officers are assigned a geographical area, where they are able to work directly with the neighborhood residents in a proactive manner. They get to know their areas, and they work more in-depth than regular patrol officers because they are not responsible for radio calls.

Community outreach is another big part of crime prevention and keeping Bryan safe. Officers attend numerous community meetings in all parts of the city, which give them an opportunity to hear directly from residents and address concerns they have. BPD also hosts Citizen Police Academies in English and Spanish and a youth Citizen Police Academy each year. They leverage community partnerships and strengthen relationships through events such as “Walk a Mile In My Shoes” and distributing turkey dinners on Christmas eve. And, they serve on community non-profit boards, such as the Sexual Assault Resource Center (SARC) and Scotty’s House.