Find out about our leadership and our different fire stations. See all the different ways the Bryan Fire Department serves you. Permit and fee information Info you need to know about installing fire alarms, sprinkler systems, and other fire protection systems.
The Bryan Fire Department has an operational budget of approximately $18.5 million with 154 full-time employees operating out of five fire stations. The department provides fire protection and emergency medical services to the City of Bryan, as well as EMS to the northern half of Brazos County.

If you need to file a Tier II report to the Bryan Fire Department, please email your document in PDF format to: tier2@bryantx.gov. 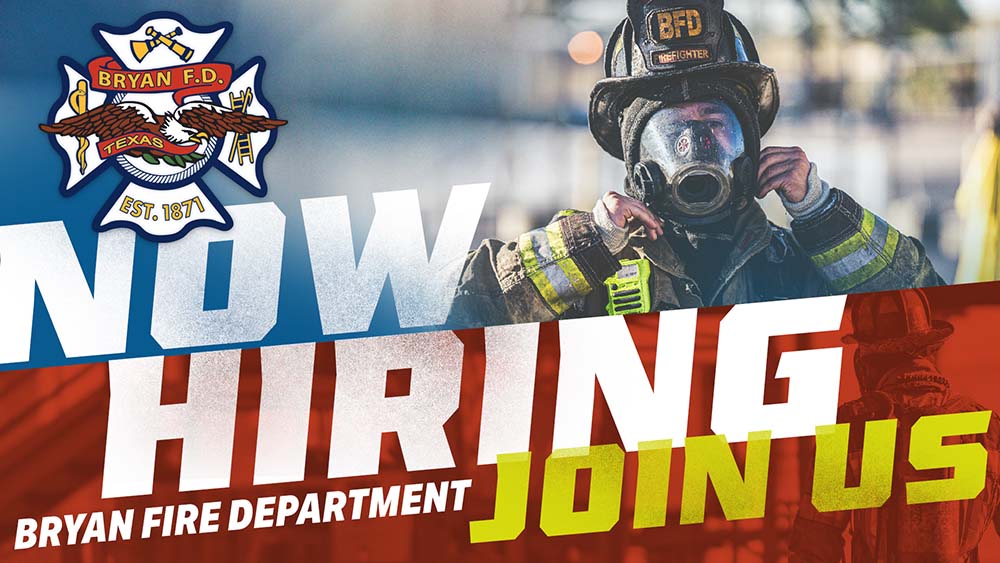 How to Become a Bryan Firefighter

Do you have what it takes to be a member of the Bryan Fire Department? Our Recruiting page has all the information to help you find out.

The Bryan Fire Department was established on July 5th, 1871, incorporated by the State of Texas as Hook and Ladder Company No. 1. The Department consisted of one hand drawn ladder truck with six ladders ranging from 12 to 14 feet long, pike poles, axes, a pull down hook and chain and twelve leather buckets.

On June 3rd, 1881, Hook and Ladder Company No. 1 amended their charter and reorganized as Protection Engine Company No. 1, City of Bryan, Texas.

One month earlier, a committee had been appointed to raise funds for the purchase of a steam fire engine. That fire engine turned out to be the first piece of American La France fire apparatus to come to Texas.

With the purchase of the steamer, a major problem faced the volunteers – the Company did not have sufficient funds to buy their own horse team. A standing reward of $5 was offered to the first team to arrive at the fire house to handle the propelling chores when called to duty. A reward of $1 was offered to the second team that arrived.

In 1914, the first piece of motorized equipment was purchased and in 1921, the Company hired its first full-time employee. The employee was on duty seven days a week, 24 hours a day and was paid a “none too attractive” salary. When he wanted to take a day off, he had to pay for a replacement. The second full-time employee was hired in 1928 and by 1960, the Department had grown to 28 full-time employees and one volunteer.

We are proud of our history and the service of our forefathers. We plan to continue the commitment and dedication they showed in serving the citizens of Bryan.

In the early days of the Bryan Fire Department, “Protection Company No. One” was proudly etched on the lantern mounted on our first steamer, the symbol under which all members of the fire department rallied. Now, those words remain the bywords for caring and fellowship as it was in those early days.

Though the Bryan Fire Department itself has undergone changes and reorganization, one thing has lasted through the ages – the feeling of comradeship. It is an association of benevolence and togetherness under which each member of the department belongs. It is a fraternity that stands for mutual protection and support of all members.

The dues that are paid go toward emotional support and assistance for each member and his/her family in time of need. They also help in making the on-duty lives of the members more easily endured. Additionally, the Company is charged with honoring retirees and giving due and worthy recognition to our long-serving members. We are the guardians of the memorial, which stands as a monument to those who have passed before us.

The lantern of Protection Company Number One stands now and always as a beacon which brightens our past, illuminates our present, and guides our future. Other Fire Department Links and Resources