The Bryan Fire Department Fire Prevention Poster Contest is back this year. Kids in Pre-K through 12th grade in Bryan are encouraged to use their artistic skills to help bring awareness to fire prevention.

Former councilmember Flynn Adcock’s service to the Bryan community will be forever remembered after a park bench is dedicated in his honor at Camelot Park on Friday, Sept. 2, 2022.

On Monday, Sept. 5, 2022, the City of Bryan Municipal Office Building and all other city administrative offices will be closed in observance of Labor Day. City offices will resume normal operating hours on Tuesday, Sept. 6, 2022.

City of College Station Mayor Karl Mooney and City of Bryan Mayor Andrew Nelson have both declared a local state of disaster in their respective cities due to extreme drought.

September 15, 2022
Home / Articles / City of Bryan honored with state and national awards for communications and marketing 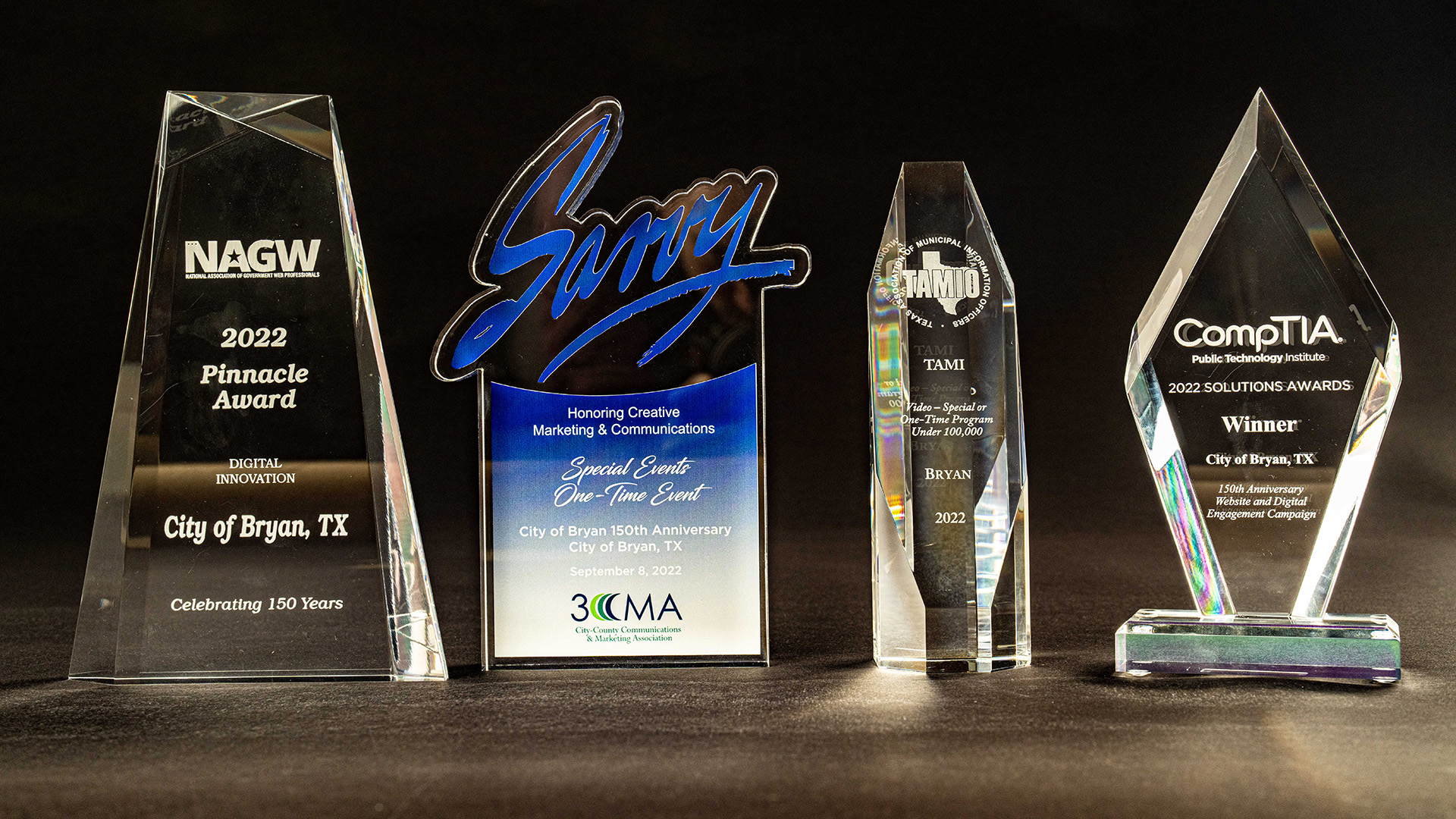 The department was honored with 13 national awards from the City-County Communications & Marketing Association (3CMA) in the annual Savvy Awards on Sept. 9, 2022:

The Savvy Awards are the national awards program that recognizes outstanding local government achievements in communications, public-sector marketing and citizen-government relationships. The Savvies salute skilled and effective city, county, agency or district professionals who have creatively planned and carried out successful innovations in communications and marketing. More than 650 entries from nearly 180 jurisdictions in 40 categories were received and judged by expert communicators from across the country.

Bryan’s Communications & Marketing Department was honored by the National Association of Government Web Professionals (NAGW) in their annual Pinnacle Awards on Sept. 9, 2022. The city’s 150th Anniversary website, 150.bryantx.gov, was honored in the following categories:

Bryan’s three awards tied for the most NAGW honors by any one jurisdiction. The Pinnacle Award for Excellence in Government Web Design recognizes the best city/county, federal and state websites across the country. Entries are judged on content, organization, design, performance, flexibility, accessibility, standards and interactivity. The Pinnacle Award for Excellence in Digital Innovation and engagement recognizes innovative digital programs, services or campaigns that are designed to engage users.

The department was one of 11 agencies nationwide to be honored by the Public Technology Institute and CompTIA in their 2022 PTI Solutions Awards. Announced on July 8, 2022, the PTI Solutions Awards recognizes agencies that have developed or deployed innovative technology solutions that positively affected local government performance and service to the community.

The City of Bryan’s Communications & Marketing Department was honored as the winner in the Web Services, E-Government, Public Outreach and Mobile Apps (50,000 to 249,999) category for its 150th Anniversary Website and Digital Engagement Campaign.

The department was also honored with 10 awards from the Texas Association of Municipal Information Officers in the annual TAMI Awards on June 9, 2022:

With these awards, the Bryan Communications Team set a new TAMIO record by winning nine first-place awards in a single year. The TAMI Awards are the statewide awards program that recognizes the best communications outreach in local government organizations in Texas. More than 450 entries were received, and entries were judged by communications experts in the California Association of Public Information Officers.